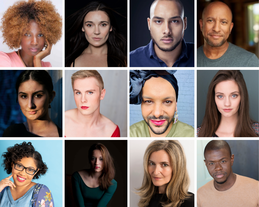 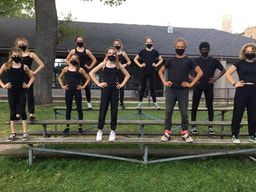 What a stellar cast! Another brilliant collaboration while the world continues further into a global pandemic.
Here's a promo link. Here's the finale link.
Here's the show.
Donate to Actors Gymnasium. They're making the world a better place. 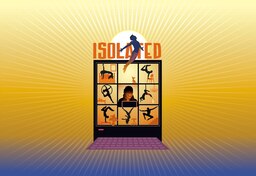 Our first round of auditions run according to plan, but the global pandemic begins before our second, and we wonder whether or not to press on. This fantastic group says yes, and we rewrite and create a new show about our experience in isolation during the top of the Covid 19 crisis.
Here's a song clip. Here's the entire show.
Donate to Actors Gymnasium. These kids are phenomenal. 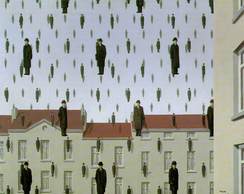 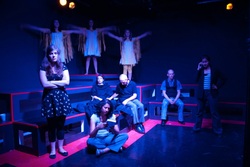 In the summer of 2012, musican/composer Kevin O'Donnell and myself teamed up to create a piece called Untitled in Collaboraction's Sketchbook 12: Reincarte. 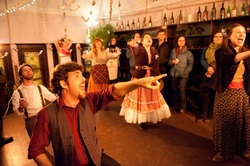 In the winter of 2012, Casey Searles and I were asked by the State Theatre of Chicago, to adapt and direct Act IV of their production, Crowded House: Shakespeare's The Winter's Tale.  Here are some pictures. 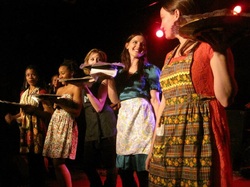 Grood ACTual Shows 1, 2, and 3
Every year, the band Grood puts on a theatrical version of a would-be normal band gig, called The ACTual Show.
Music is composed and performed live by Grood.
Idea Squad: Charles Otto, Kasey Foster, Josh Yellin, Jared Melnyk, Christina Seo
Director: Kasey Foster and Charles Otto
ACTual Show 1 took place at Subterranean in 2011.
ACTual Shows 2 and 3 took place at Martyrs' in 2012 and 2013.
Here is montage of segments from the first two ACTual Shows. Here are photos from most recent, Actual Show 3.
An excellent DVD/CD album of ACTual Show 3 will be coming out as soon as post-production wraps it up. Woohoo! 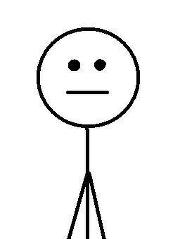 Assignment #403
In the fall of 2011, I created and directed a full-length production entitled Assignment #403. This project was one of my most difficult accomplishments to date. It was an idea that lived for five years in my brain, and finally came to fruition in a month of rehearsal, and a year of building. Produced at High Concept Laboratories, it consisted of an amazing cast of twelve, and without language, told the story of a person who searches for companionship, and through trial and error, with the aid of those unforeseen forces we, the cast called "the mechanicals", finally finds it. The production included the artwork of Sam Polce, among others.
Music credits: Impossible Recording Machine, Jeff Thomas, Mark Messing, Kevin O'Donnell, Charles Kim, Charles Otto, and Mikhail Fiksel.
I suppose now, looking back, the show accurately reflects views of mine that I still know so little about; that life is the magic of timing, and best happens with the help of friends, both familiar and unfamiliar. I loved this show.
Sadly, I have few photos that document the process and production, buuut.. I do have a montage. 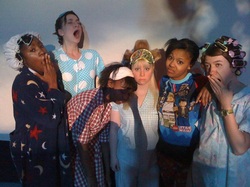 In 2012, I was hired to brainstorm for a large private event that carried the theme, 'Dream'  The result was a fun performer/server hybrid I call, the pajama server. They were festooned in the finest pjs, and with serving trays I had attached to pillows, roamed throughout the party yawning and falling asleep as people ate hors d'oeuvres from their "trays". At one point in the evening, amidst a raucous party, the pajama servers were found huddled and cuddled on the floor asleep. Pretty funny. Not sure if it worked, but pretty funny. 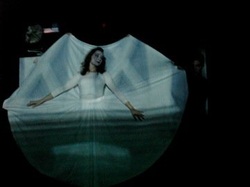 With The Anatomy Collective, I created and conceived a piece called Project Hmmph for The Mill's Etc IX Fest in the spring of 2010. 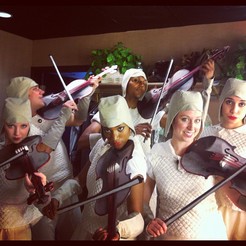 In summer of 2013, Redmoon asked me to choreograph a private event in Orlando, FL.
It involved antler caps and bell costumes. It was good fun.

Most of my history with Redmoon has been as a performer. My relationship with the company first began winter of 2004. As our friendship grew, I stopped performing, and went through a lab apprenticeship program, under the direction of Angela Tillges, to learn more about producing spectacle events. 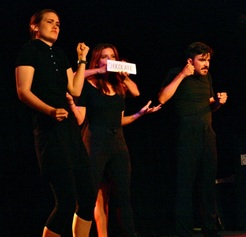 Dance Tribute
Sheesh. I've written about Dance Tribute on practically every page of this website.
Probably because I love it so much.
How's about I simply redirect you to my choreographer page.
Or maybe you just want to see some pretty photos? 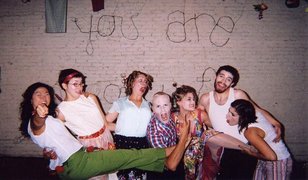 And a Lack Thereof
This was my first production in Chicago, in 2005. Whoa! It was produced by The Anatomy Collective, under the superb guidance of Stephanie Acosta.
It was a 45 minute collection of movement pieces, each piece associated with an action ending in "ing". Waiting, Working, Reproducing, Learning... The last piece was "the lack thereof", when no action was taken. In this production, "the lack thereof" meant to lose out on something great.
Again, I was blessed with a most wonderful cast, who have since dispersed into the world, and are doing great things of their own.